Owning a camera is great for those who loves taking pictures especially people with photography as a hobby or those who want to get a better image quality than what they get from the common smartphones. Canon Powershot SX530 vs Canon Rebel T6 are two nice model to pick but for different users because they also have different capabilities on board. If you are considering these options, go check what they can offer below so we can pick the one that fit us better. 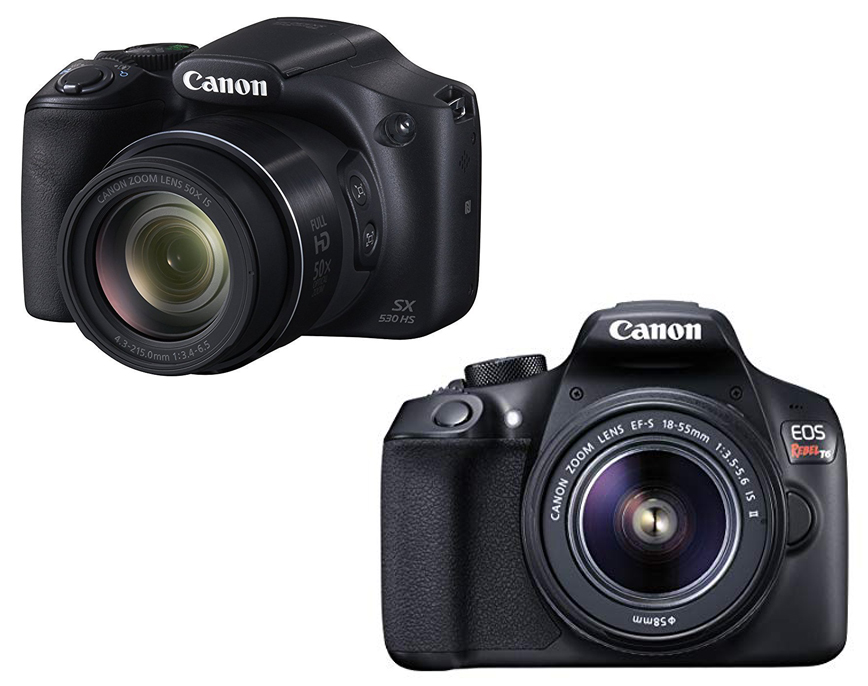 Camera Types
Camera is widely used today and continue being popular for long probably in the future as well because people loves taking pictures whether it is the scenery we found while travelling or self-portrait while wearing an attractive outfit. The use of social media and internet is also affecting the popularity of camera for in the past, we can only show them to friends or family but now, anyone with an access to the internet can enjoy your work as well which push people to become more creative.

Most people who are not particularly interested in photography will rely on their smartphone’s camera because today’s phone especially the high-end models are already featured with a good and far better camera than its predecessor as well as some manual adjustment combined with a reliable processor. They are very easy to use and doesn’t require much to learn but the most important part is it convenience for user to carry and use whenever they want since we hold in to our phone all the time.

However, if you want or need something better with your image quality, the smartphone camera may not providing enough capabilities to help you get those precious shots so we will need a dedicated camera with a bigger sensor, pixels and all the manual setting required. When talking about camera, we have few models in the market or those that commonly used today starting from the entry-level or generally cheaper, point-and-shoot to DSLR and Mirrorless that are more capable and mostly quite expensive.

DSLR and Mirrorless are very similar while the image quality can be different from one model to another depend on their specification but the Mirrorless just like the name, light directly passes through the lens and right into the image sensor. However, today, we want to talk the other part which is often confuse new user or beginner when they want to purchase a dedicated camera and it is between the DSLR and Point-and-shoot. If you wonder which model will fit you the most, it all depends on what kind of capabilities you want and how much we can spend.

DSLR is seen as higher model and better option for people with a certain goal in their photography skill because it is sporting powerful sensor and higher pixel counts above what we can get on a regular point-and-shoot. Another benefit is we can change the lens as needed when you need to capture an object that require a different size lens with what you have mounted previously. With this much custom, user need to spend some time learning the curves unlike with a point-and-shoot which is far more user friendly with limited capabilities. 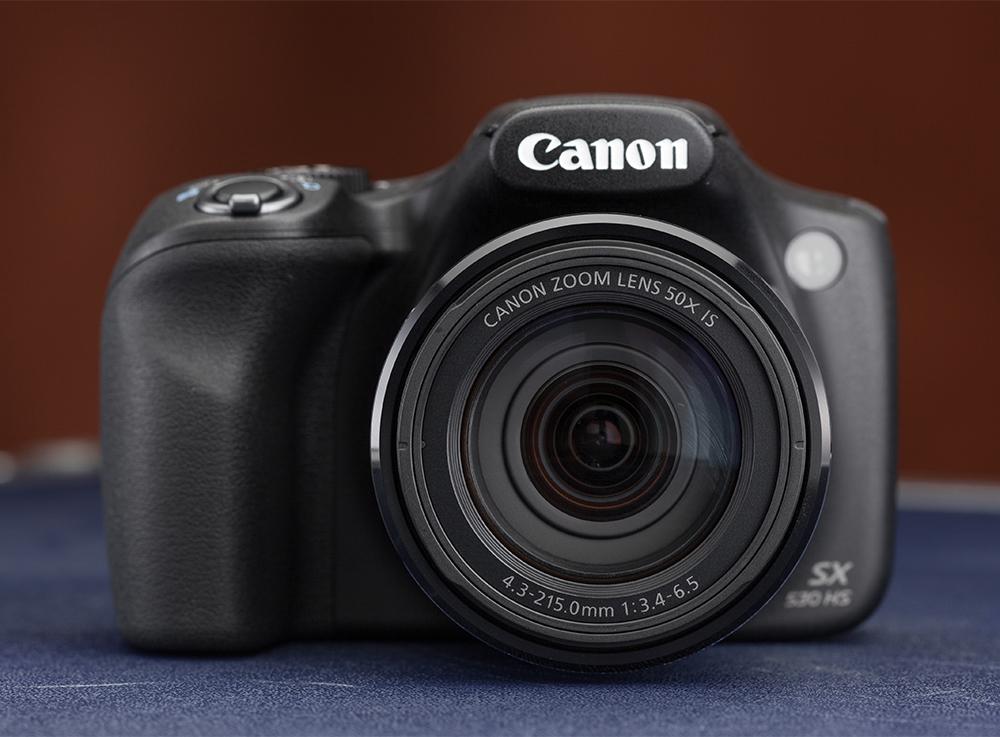 About Canon Powershot SX530 and Canon Rebel T6
If you already consider your need and get an idea on what kind of camera to pick, now is the time to look for the most suitable item out there and while it can be very challenging, we should pick carefully to avoid regretting later. But, if you don’t have much time to spend looking at each one of them from different brand to different model, it is also good to start looking at what the other user has been using since it means a more promising quality.

Canon is one of the biggest and well-known manufacturer of camera and their history is enough to prove how good their products quality are. They are also offering a wide range of products from those we can use with ease to those that need some more time and knowledge to fully utilize including the camera. If you wonder which between a digital point-and-shoot and a DSLR will fit you better, Canon Powershot SX530 and Canon Rebel T6 will be a nice comparison to consider.

As you may already know, both of them are different with Rebel T6 being a DSLR and the other is a user friendly digital camera which is similar to what we used to have in the past but now the form factor is different. While they are not exactly the same type, there is something that make them sit in the same place and it is the level for both models are basic or the one we can opt to start the journey from their respective product line.

Canon Powershot SX530 and Canon Rebel T6 Design
When first checking Canon Powershot SX530 and Canon Rebel T6, the first thing that comes to our mind is how similar they are because while the SX530 is a point-and-shoot, this camera is built like a DSLR which is bulky and heavy so it may not as travel friendly as its friend. It looks like a DSLR in a glance but when you flip them, we can see that SX530 is not featured with something most of us want in a camera which is viewfinder unlike the Rebel T6.

They are handled the same and if you rub the back cover where we rest the thumb, both of them are featured with a textured material to make sure our grip is not easily loosen. As a DSLR, Rebel T6 has much more controls on board and new users will need to read the manual first to make sure we understand all the capabilities yet the SX530 is fairly simple and can be used without needing much to learn. In addition, while they have the same 3-inch LCD rear screen, the latter is twice better in quality.

Canon Powershot SX530 and Canon Rebel T6 Image
Moving into what these cameras can offer to you, both of them are a reliable cameras that already satisfied many users due to their capability in producing good image quality but they shines in different part because in general, for image quality, the Rebel T6 will be better than SX530. This is because the DSLR is coming with crop sensor or we often called APS-C which when translated in size is 22.3mm x 14.9mm while at the other hand SX530 has a backlit CMOS sensor in 6.17mm x 4.55mm.

If you see their specification, the pixel count they have actually is not that far comparing between 16 MP to 18 MP but the more important part is sensor size because bigger sensor will produce a better image quality as well so resolution alone doesn’t really affect the result when we are comparing between a regular digital camera with a DSLR. A smaller sensor in general will capture less light and giving us a result image with less dynamic range as well as not going to be as clean as what we get with a DSLR.

While in image quality SX530 is not going to win, it is in the zooming range because the SX530 is actually a bridge camera which means this model is offering a huge range of optical zoom, in fact at 50x. This type of camera is popular among users who need to have a camera that can be used from a far distance to capture a subject such as nature photographer or those with the hobby since we can take shots without coming closer and increasing the risk of scaring small animals.

If you ask what the Rebel T6 is offering on the zooming range, the answer will depend on what lens we are using because we can use several with this model and the one we used as an example above, it already comes with 18-55mm lens with 3x optical zoom. However, there is one similar thing between both and it is an additional feature which is the wireless connectivity since they are equally have built-in Wi-Fi to increase the convenience when we need to transfer files. Read also: Canon EOS Rebel T6 vs T6i here.

Canon Powershot SX530 and Canon Rebel T6 Video
The last but not least when looking for a camera is the video quality because even though it is not the main purpose why we need to purchase one of these models, the video recording ability sure will come in handy when you just need to record that barbeque session with friends and family as well as record something that may attract your attention. In this part, Canon Powershot SX530 and Canon Rebel T6 are capable of filming at 1080p max so we can’t get that amazing 4K yet.

Comparison
Now, it is time to compare Canon Powershot SX530 with Canon Rebel T6. As you may already know, the basic difference between both of them is on the type since SX530 is a point-and-shoot while the latter is a DSLR which mean the image quality will be superior with Rebel T6 but, the SX530 is a bridge camera so it is shining in the optical zoom. In addition, they have the same Wi-Fi, image processing, and 1080p video recording.

Conclusion
All in all, the decision is all yours to make because we may have different need and budget to spend so it is better to make a choice based on what you want to use the camera for. However, if we are to choose, we will go with a DSLR Canon Rebel T6 since our aim is to get a higher image quality yet, if your activity require a huge range of zoom, SX530 is a more ideal option.