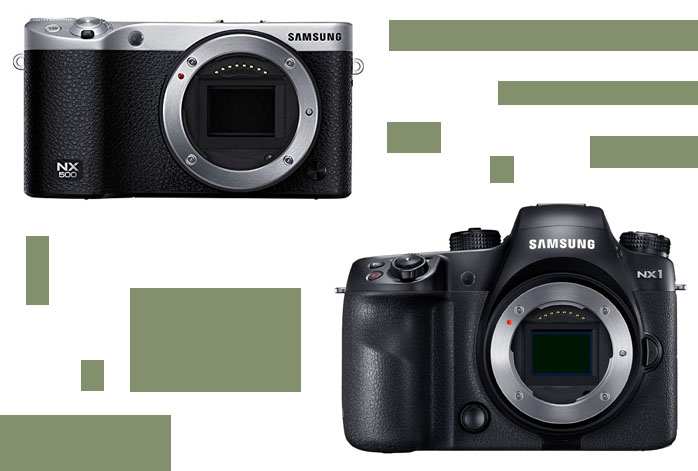 Design
Comparing the two products side by side, we can immediately tell that Samsung NX500 has a more compact and portable design than Samsung NX1. The cheaper model is smaller and thinner and lighter. The weight difference is very noticeable. You will be more comfortable with Samsung NX500 in your pocket compared to Samsung NX1.

Output Quality
Both models are armed with a 28 MP APS-C CMOS image sensor, which is immensely powerful for producing superb images. Both can produce pictures of the same size and also 4K Ultra HD videos. So, roughly, they can have similar output quality. However, Samsung NX1 is given more advanced features that can give you better control over your images, and deliver enhanced images as the effect. Samsung NX1 comes with built-in flash for precise illumination on your object, electronic viewfinder for optimum framing and control, and also faster maximum shutter speed. Thus, Samsung NX1 can deliver brighter and clearer results, especially for fast-paced actions.

Besides having a higher maximum shutter speed, Samsung NX1 also has a much faster continuous shooting speed of 15 fps. As a comparison, Samsung NX500 only has 9 fps. So, Samsung NX1 can give you a considerably better edge for snapping the pictures of fast-moving objects.

Additional Features
Samsung NX1 is enriched with more features and connectivity than Samsung NX500. It has a microphone input port so that you can capture high-quality audio for your video recording. There is also a headphone port, in case that you need to perform direct monitoring over your recording. For easy and practical file sharing, both models have built-in Wi-Fi, but Samsung NX1 also has the NFC technology that is even more practical and fast. Last but not least, Samsung NX1 also has a much longer battery life than Samsung NX500.

- New 28MP Back Side Illuminated APS-C Sensor
- The NX AF System III on the NX1 is supported by 205 phase detect auto focus points
- NX1 can shoot at up to 15 FPS at full resolution. It can also capture UHD/4k video to SD card or can output it via HDMI port
- Incorporates the newest Wi-Fi standard, IEEE802.11ac
- Includes Adobe Photoshop Lightroom 5
Get Your Best Price Here