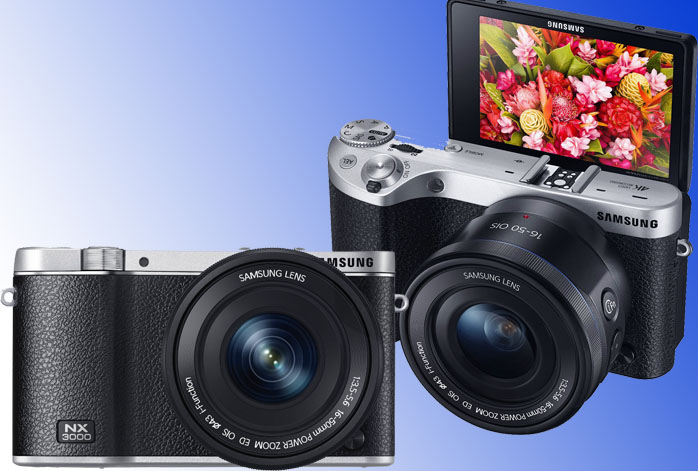 The primary thing that the manufacturer boasts with the NX Smart series is the smart features. Considering that everything in our daily life is getting ‘smart’, from kitchen blenders to watches, why don’t make our cameras smart as well? Samsung NX3000 and Samsung NX500 both feature built-in Wi-Fi connectivity and NFC technology. With either of these models, you can share your pictures and videos instantly to your friends and family. You can also upload directly to your social media or e-mail. Samsung NX3000 and Samsung NX500 support DirectLink and MobileLink for easy data sharing, PC Auto-Backup, Remote Viewfinder PRO for the ultimate controllability, and even baby monitoring. Both models come with articulating screens, external flash shoe RAW support, face detection autofocus, and AE Bracketing.

Samsung NX500 brings a lot of improvements compared to Samsung NX3000. It has a higher sensor resolution (28MP vs. 20MP), so it can capture more detailed images. It can also record videos in the Ultra HD 4K resolution, while Samsung NX3000 still offers the Full HD 1080p. Samsung NX500 comes with 51,200 maximum ISO and 209 focus points. Thus, its pictures can have excellent color accuracy and sharpness. Samsung NX500 makes a better choice for snapping pics of fast-paced actions and sports thanks to the 9fps photo burst and 1/6000s maximum shutter speed. Also, Samsung NX500 is now armed with touchscreen control.

- New 28MP Back Side Illuminated APS-C Sensor.
- NX500 can shoot at up to 9 FPS at full resolution
- Captures UHD/4k video to SD card
- Incorporates the newest Wi-Fi standard, IEEE802.11 b/g/n
Get Your Best Price Here