With the rising popularity of action camera, we can see many people are utilizing them to record their footages while doing various activities. It is indeed fun and versatile for various occasions but not all of those similar models out there will give you the proper performance. If you need a camera that can offer both high quality videos as well as some useful features, Kodak PIXPRO SP360 vs GoPro Hero 5 are two great choice to go. See what they can offer so we can pick better below. 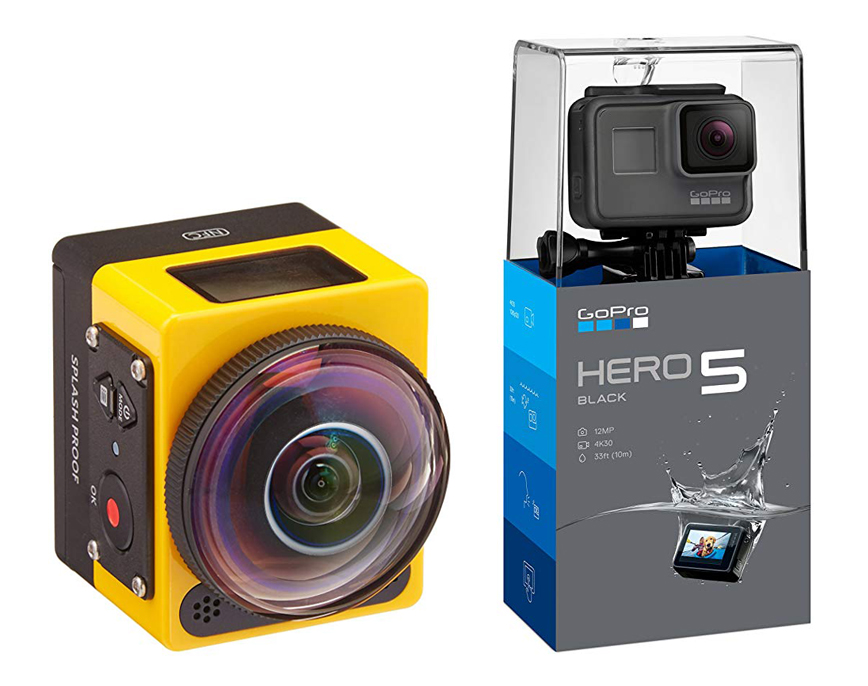 Action Camera
With so many options to take a picture and record a footage, we are having such a convenience when coming to do the activities. We can use our smartphone’s camera, dedicated cameras, and the latest trend an action camera. All of them are very useful when you need to capture something or record a footage because most of the time, depend on the model, these cameras will give a reliable results. However, not all of us will get the best benefit from specific type.

Among all of them, the most popular for photography enthusiast is probably a dedicated camera like DSLR and Mirrorless because they are the most capable when it comes to capturing a high quality photos along with a bunch of manual setup on board so the user will be able to tailor their work better. But, due to their capabilities, most of this type of cameras will be quite expensive and not as easy to use compared to a digital point-and-shoot which mean we have to learn some of its curves first.

The latest trend or probably the one being hauled here and there today is the action camera and it is all start several years ago thanks to GoPro. We are sure both regular people and those keeping an eye to what’s happening are already familiar with this brand because they are the one who brought this type of camera into spotlight and today, we see many other manufacturers are also offering similar type of camera to answer the market demand.

For those who are not familiar with the camera yet, we bet the question often asked is whether it is necessary to have one or does it worth the price which can be quite expensive sometimes. The answer is based on its user because the best reason to purchase an action camera is because the unit offer much versatility for being multi-purpose. In general, an action camera can be carried anywhere you go, moreover, with the rising popularity of video blogging.

The next best benefit of owning an action camera is they are robust and reliable just like the name “action” which is built for different type of activities so in general they can go with more burden and abused, the type that is not going to be good for your dedicated cameras like DSLR or camcorder. Not only capable of sustaining being knocked off from an elevated place, some models are also water resistant even without a protecting case.

About Kodak PIXPRO SP360
If you are also interested to purchase one of the best action camera out there, now is the good time to see what the market has to offer because there are so many of them to satisfy our requests and different range of price to match with how much we can pay. Not only big names, there are also those made by other smaller companies which many of us are not familiar with. While not all of them are lower in quality, if you are specifically looking for a more robust unit we do recommend to seek from a well-known manufacturer instead.

One of the most popular camera brand today is Kodak and we are sure most of you also agree that they are offering good quality products. Following the market, they also offer action camera into the collection and one of the best model to pick today is their PIXPRO SP360. This camera is very popular back then because it is the first that offering that 360 degree view, the one we see on Google street view so, if you are looking specifically for this type of camera, the model is already a solid pack.

We also love the fact that Kodak PIXPRO SP360 is easy to use and will give us an experience that many other similar cameras can’t offer. Not only for entertainment purpose; it can help you with more serious work as well for example those real estate or travel agents who need to market a house so they can capture the whole house or hotel and its surrounding location to attract their customers.

Kodak PIXPRO SP360 Design
This action camera looks like any similar device in the market, the type you can distinguish as one, the moment we lay an eye on them. However, compared to similar models like the VSN Mobil V.360, it is fairly small in built with a body only measured about 1.6-inch wide and 2-inch high with 1.5-inch deep. The lens is mounted on top or front which covering almost the whole face and then the stereo mic is placed right next to the lens.

Kodak PIXPRO SP360 Video Quality
Talking about footage recording quality, Kodak PIXPRO SP360 is not the best you can get out there but does support the kind of point-and-shoot operation so any user can get used to it almost instantly. The video quality itself is not very amazing and before talking further, the one in our article is the regular SP360 and not the 4K model since the camera also has the version that capable of recording higher video quality. As for this version, it only capable of 1080p at 30fps and 360 degree 1440p at 3- fps.

Taken from CNET, the image we are getting is fairly nice and pleasing to watch in small screen with bright and punchy colors as well as good detail. When viewed closely with larger screen, we can see some mushy details especially on the edges of the footage.

Kodak PIXPRO SP360 Feature
Like many other action cameras, Kodak PIXPRO SP360 is also featured with Wi-Fi which is automatically on when we activate the camera. There is only a small monochrome screen to help navigating the menu so if we need to set the shot, at least we need to connect it with smartphone or computer. As for the image capturing capability, it is able to do a burst of 10 and doing time lapse video as well as loop recording that will be useful when you record while driving.

About GoPro Hero 5
The SP360 is sure a good action camera to opt but it is still far from some people expectation and if you are also thinking to get a better options, the Hero 5 from GoPro may get you a better image quality and overall greater performance as well. When talking about action camera, it is hard to exclude the pioneer and flagship manufacturer who bring us the versatile device and as for this model, many people adore it thanks to what it can offer for the user.

GoPro Hero 5 Design
If you ever see a GoPro camera, this model is also coming in similar design because it is still as simple as ever with a box-like design, the one we can grip tightly on our palm. This model is giving us anything from the previous Hero 4 including the lens and technology but now with a better screen. However, the Hero 5 also durable and reliable enough with a polycarbonate housing since now; it is both dust and waterproof for 10 meters so we can carry them along on our journey with ease.

GoPro Hero 5 Video Quality
As for the image quality coming from GoPro Hero 5 recording, it is amazing even during night or low-light condition for it still have an acceptable result despite the cameras size and sensor. Its sensor is the same like any point-and-shoot such as Canon Powershot SX530 vs Canon Powershot SX420. The quality will not beat any DSLR but the value here is a compact piece of device that can give a reliable footage as well as pictures and in addition, this model is already supporting 4K video.

GoPro Hero 5 Feature
One of the most favored feature from GoPro Hero 5 is the voice command because now if you don’t have access or time to do with the manual menu, we can just speak to the camera since it now accept voice command. The control it can do is quite many such as start recording, do highlight, stop recording, take photo, shoot burst, start time lapse, and many more. In addition, with a $5 subscription a month, we can upload files to cloud to edit or share it on the go with our smart device.

Comparison
Now, let’s compare Kodak PIXPRO SP360 with GoPro Hero 5. As you may already know, in term of footage quality, the Hero 5 is better than SP360 as well as offering 4K quality already but the latter also not offering a 360 view like the Kodak camera. As for the feature, Hero 5 is richer thanks to the colored and even touch-sensitive display as well as capable of accepting voice command when connected to the Wi-Fi.

Kodak PIXPRO SP360
- Advanced MOS sensor with 16 million image pixels gives you more speed, quality and clarity than a traditional CCD or CMOS sensor with multiple viewing modes: ring, dome, front Degree/rear 180 Degree, 360 Degree Panorama, globe.
- With Wi-Fi and NFC connectivity, set the SP360 where you want it and take your phone with you to call The shots anytime With the Pixar remote Viewer App on your iOS/android device. Available at the App Store/Google Play.
- Capture all the high speed action with 1080P full-HD video or full-res images in 10Fps with a push of a button.
- 2M shockproof/ -10 Degree freeze proof/ dustproof/ splash resistant.
Best Price Click Here
GoPro Hero 5
- Stunning 4K video and 12MP photos in Single, Burst and Time Lapse modes Charger not included
- Durable by design, HERO5 Black is waterproof to 33ft (10m) without a housing
- Additional GoPro HERO5 Black Features + Benefits below on item page Time Lapse Photo Intervals: 05, 1, 2, 5, 10, 30, 60 seconds
- Preview and playback your shots, change settings and trim your footage, all on your GoPro
Best Price Click Here

Conclusion
All in all, the decision is all yours because not all of us are going to have the same preference so it is always best to follow what you need from the unit. However, if we are to pick, we will go with the GoPro Hero 5 because it is offering better video quality and overall better features especially the capability to directly preview the shot from its dedicated screen.