Some people can’t decide between Fujifilm X-M1 and Sony a6000 because they do feature various similarities. They each comes with built-in Wi-Fi, flash, also AE bracketing and continuous shooting. Even though Sony a6000 clearly has a higher number of pixels, Fujifilm X-M1 is cheaper, so people are wondering if this makes a fair trade. Are you having the same question? Read on to find the answer! 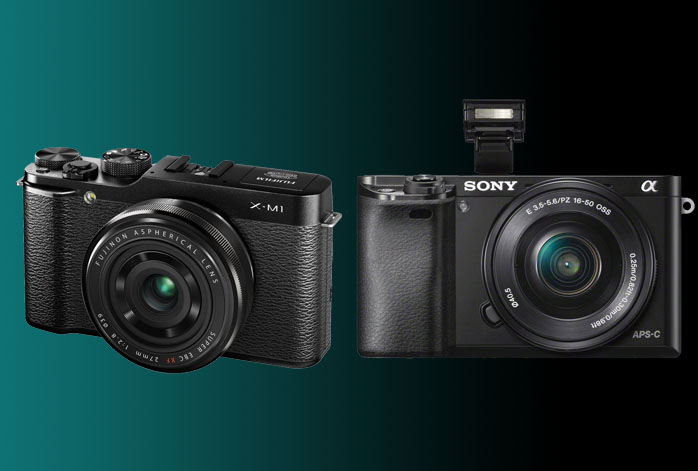 The Similarities
As mentioned briefly before, the two models come with similar additional features. Fujifilm X-M1 and Sony a6000 each has built-in Wi-Fi connectivity for easy and quick data transfer to and from your other devices. Each also has a built-in flash, a handy feature that can tremendously help you in difficult lighting situations. There is also an external flash shoe for a better aiming of the flash. Each has an articulating screen for more flexible shooting positions, allowing you to shoot from difficult angles while still seeing what your camera is aiming exactly. Quite interestingly, the display screens have a similar resolution of 920k dots. Neither model has a weatherproof body construction. (See also: Samsung NX3000 vs Sony a6000)

The Differences
Needless to say, Sony a6000 holds numerous advantages over Fujifilm X-M1. Sony a6000 is powered by a 24 MP APS-C CMOS sensor, with a maximum ISO of 51200 and a total 179 focus points. It boasts an exceptional continuous shooting speed of 11 fps. With such specifications, Sony a6000 boasts a huge versatility. It can capture sharp and well-detailed images, with very good focus over the objects. The high ISO and photo burst allow Sony a6000 to perform for different purposes, including sports and landscape photography. Fujifilm X-M1 is pale in comparison, with only 16 MP image sensor, 6,400 max ISO, and 6 fps photo burst. The gap is too significant.

Both models indeed support AE bracketing, a useful feature for taking multiple shots with varying exposures in order to deliver high-contrast scenes. AE bracketing is beneficial in tough lighting conditions as well as in HDR photography. However, Sony a6000 is more reliable to generate better results than Fujifilm X-M1 because it has an AE bracketing range of plus-minus 5EV. Fujifilm X-M1’s is only plus-minus 1EV.

Last but not least, Sony a6000 comes with a significantly larger buffer capacity than Fujifilm X-M1. As the effect, Sony a6000 can take more shots before taking a break, making it ready to serve for a longer time in long sessions.

Fujifilm X-M1 vs Sony a6000
As the conclusion, we recommend you to stick with Sony a6000. The output quality and performance are simply much better than Fujifilm X-M1. It is also more versatile for different types of photography.