Image capturing has been very popular since the first camera is invented but today, we have so many options when it is about how to immortalize our precious moments. For those who want to have dedicated device but are not ready yet to upgrade their game, Canon Powershot ELPH 180 vs 360 are two great options to pick from the brand’s entry level digital cameras. Go check our article below to see what they can offer and which model will suit your preference better.

Affordable Camera
Camera has been around for quite some time from the bulky and heavy to transport classic tools to today’s compact and high in capabilities ones. Our memory is not as strong as we need them to be which is why it is always good to have some moments being immortalize so we can share with other people whether they are from your generation or for our kids and grandkids to look at. In the past, camera is widely used but technology has made things much easier for us now.

In the last decades manufacturer start to incorporate cameras into smart devices we can carry almost anywhere because they are seen to be more convenience and while some older models are doing a good job in introducing the concept, what we used today is far more advanced and even better than our older cameras. What has been used widely today are usually DSLR or Mirrorless due to their capabilities to offer both great images/videos quality and manual adjustment for enthusiast alike.

However, just like many things, these types of cameras are not as cheap and while they are a suitable choice for people who are planning to improve their skill or used the device to gain professional result, they may not very interesting for those who just want to take pictures from time to time and don’t want to be bothered by the manual adjustment because let’s be honest, not all of us understand how to tweak them manually. For a regular users like us, the most suitable one probably the point-and-shoot style.

This type of digital camera is a good option because they are what we have been used since long time ago and chances, most of us ever use them at least once in the past whether it is our parent’s or our friend’s. The camera is easier to use with minimal adjustment we can access but the huge issue about it is coming to the quality itself since cheaper camera usually have a smaller sensor and feature as well as not that reliable for video recording.

However, if we can spend some time checking on what the market has to offer, we may still able to find a good camera with a better quality yet still affordable enough not to burden your wallet. The best model should serve its main purpose as an image capturing device and give you certain quality worth the price level. 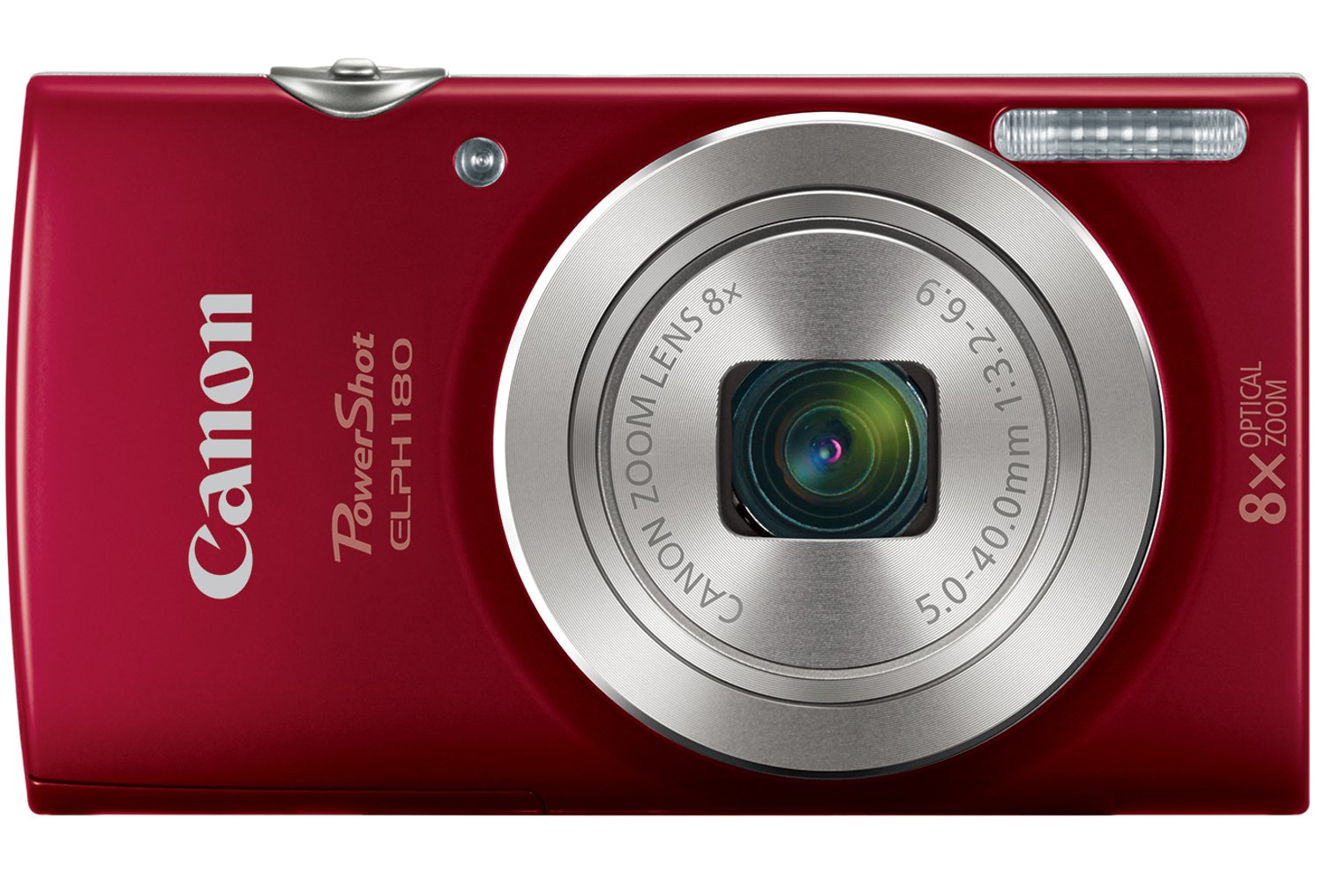 About Canon Powershot ELPH 180 and 360
Unlike in the past, it seems that manufacturer no longer produce and introduce new entry-level cameras as much compared to their higher-end DSLR and Mirrorless so it may not as easy to find a new released items in case you always want to be up-to-date. Since the amount can be overwhelming especially when combining all of those manufacturer newer and older models, it is good to stick with one of your favorite brand because it can reduce the options quickly. Read also: Canon Powershot 180 vs Sony DSC W800 here.

One of the most popular and well-known camera manufacturer is Canon and we are sure you are agree as well because this brand is among the best when it comes to this image capturing device even for those in professional level. For people who only need one that can be easily used can carried everywhere, their entry-level model such as Powershot ELPH 180 and 360 are two good models to pick. These two are on the same family and only different based on the level of capabilities.

Both of these models are indeed affordable compared to many popular, high-end DSLRs but since we are spending little, we should also not hope to see much capabilities planted inside. However, it doesn’t mean Canon Powershot ELPH 180 and 360 are bad cameras because they certainly not and probably will set nicely into your preference. In general, they are a versatile option we can used on various occasions especially when taking daytime images.

Canon Powershot ELPH 180 and 360 Design
As you can see from the sample picture above, they are very comparable even just from the design alone since the 360 still retain the same form factor as its predecessor and many other in the line. The point-and-shoot form factor is indeed make it easy to handle the camera and taking a quick shots while also comfortable enough to be slip in your jacket pocket or carried anywhere without having to pay much attention. The face stays the same but material is improved from plastic in ELPH 180 to metal in 360.

When you flip the camera, we can see that ELPH 360 is a new model and meant to offer you slightly more than the basic because here we found a larger LCD screen from formerly 2.7” now in 3.0”. The top control seems to be slightly re-designed as well along with the buttons on the back yet, the general function stays the same except for the last lower button which is used for a new feature not present in ELPH 180.

Canon Powershot ELPH 180 and 360 Image Quality
Just like when looking for any camera for any purpose, the most important thing about them is whether they can take a good shots or not and the one that satisfy you the most is of course the better of them. To give you a nice image capturing experience, Canon Powershot ELPH 180 is coming with 20 megapixel 1 /2.3” CCD sensor while the ELPH 360 is with 20.2 megapixel 1 /2.3”CMOS sensor which is actually the same so we can hope to see the same image quality produced by both models.

When tested, both of them actually able to produce some great result and as for Canon Powershot ELPH 360, it is slightly better and when tested in daytime outdoor, both of them are working quite fast for an entry-level point-and-shoot. We don’t see any significant shutter lag and the camera quickly take images but this is happening when used under a good lighting condition such as outside the house or in a room with adequate lighting so we can capture fast movement which is useful if you want to take moving subject like a child.

When the flash is utilize, these cameras also don’t show an annoyingly long delays from shot to shot yet there is still some noticeable lag. However, things is a little bit tricky when we move to indoor shooting because it means we have to use the flash which lag the camera performance and we do like to stick with flash because shot using ISO is not that reliable. Both of Canon Powershot ELPH 180 and 360 indeed have different ISO level but it will decrease the image quality.

The ELPH 180 is allowing user to shot from ISO 100 to 1600 in which ELPH 360 is up to 3200. We do use the ISO to take indoor picture but in our opinion it is better to be kept low because the higher it goes, the image result does suffer a huge loss since it is not as sharp as when used with proper lighting and show much annoying noise. At the other hand, when flash is used, the camera is slowing so capturing moving subject becomes harder and will get you blurry result.

In addition to sensor type and ISO range difference, there is also a difference on the zooming ability which we are sure reader already know since it is printed on the cameras’ face already. The ELPH 180 is allowing user to use digital zooming up to 8 times and the other is up to 12 times.

Canon Powershot ELPH 180 and 360 Feature
The last is additional feature because as we have mentioned earlier, the latter ELPH 360 is coming with additional feature not present in the other and this feature is Wi-Fi connectivity we can activate by pressing the dedicated button. This connectivity is increasing user convenience since we can transfer file directly to smartphone, computer, your Wi-Fi printer and the web service so we don’t have to use card reader anymore.

Comparison
Now, let’s compare Canon Powershot ELPH 180 with 360. As you may already know, the difference between both of these cameras are on the sensor type, amount of zoom, ISO range and additional feature since the ELPH 360 is using CMOS sensor instead of CCD, have higher zoom, wider ISO range as well as Wi-Fi as the connectivity.

Conclusion
All in all, the decision is all yours to make because we may have different preference and budget to spend as well as things to consider. However, if we are to choose between these models, we will go with Powershot ELPH 180 because the price gap between them is still too much in our opinion to make up for the difference in feature.